I recently had the opportunity to look into some fundamental Continuous Integration and Deployment techniques we use to buildnrfcloud.com.We rely heavily on AWS,so it was natural to look into usingAWS CodeBuildas a task runner for our private repositories..

I previously had a fantastic experience working withTravis CI,but it adds a hefty fixed price to an infrastructure.On AWS CodeBuild costs occur only during the runtime of jobs (which are run in Docker containers).This,and a potential better integration with other AWS services,gave me the initial reason to look into using it as the main task runner for our TypeScript projects..

One precondition is tohave tests.The benefits of tested software,especially in a fast-moving environment,are manifold and I have been practicing TDD for many years.Tests will ensure that a piece of software still works if you change a dependency..

Another invaluable helper isGreenkeeper: it will send you a pull-request if a dependency is updated,which will in turn trigger a CI build.If everything works fine,you are left with merging a PR.It's a 1-click solution to updating dependencies and it makes working with dependencies fun again..

Since npm 5 there is also a new and improved lockfile:package-lock.json,which is a huge improvement over the old shrinkwrap.It ensures that when runningnpm cionly the exact dependencies described in the lockfile will be installed.This enablesreproducible buildsbuilds of our package and we can be certain that we have the exact same executed code in production that we ran when testing..

Greenkeeper has an addon calledgreenkeeper-lockfilewhich takes care of updating the lockfile just for the dependency after a successful test run..

A changed dependency also calls for a new release of the host package,and this in turn will trigger updates and releases to packages that depend on the host package.Managing this manuallywould simply be insane,or just plain monotonous.But thankfully tosemantic-releasethe process of release new versions can also be automated!(I have explained the whole the process inthese slidesin 2016)..

I already had begun to add CodeBuild support toenv-ci,which Greenkeeper uses to detect if it is running in a CI environment and in which.Since the official images uses an outdated Git version (1.9) it requiredsome back and forthuntil we figured it out..

The next task was to getgreenkeeper-lockfileto work in AWS CodeBuild runs which I have implementedin this PR.Also here I needed to deal with a quite old Git version and figuring out CodeBuilds way of cloning the repo.It also does not provide all the necessary details about the build in the environments so I needed to persist that during the build,sincegreenkeeper-lockfilewill apply changes to the repository -- it is updating the lockfile and commit this back to the PR..

Using abuildspec.ymllike this we finally can have automated library releases and dependency management on AWS CodeBuild!!

And here is the result on a real PR: 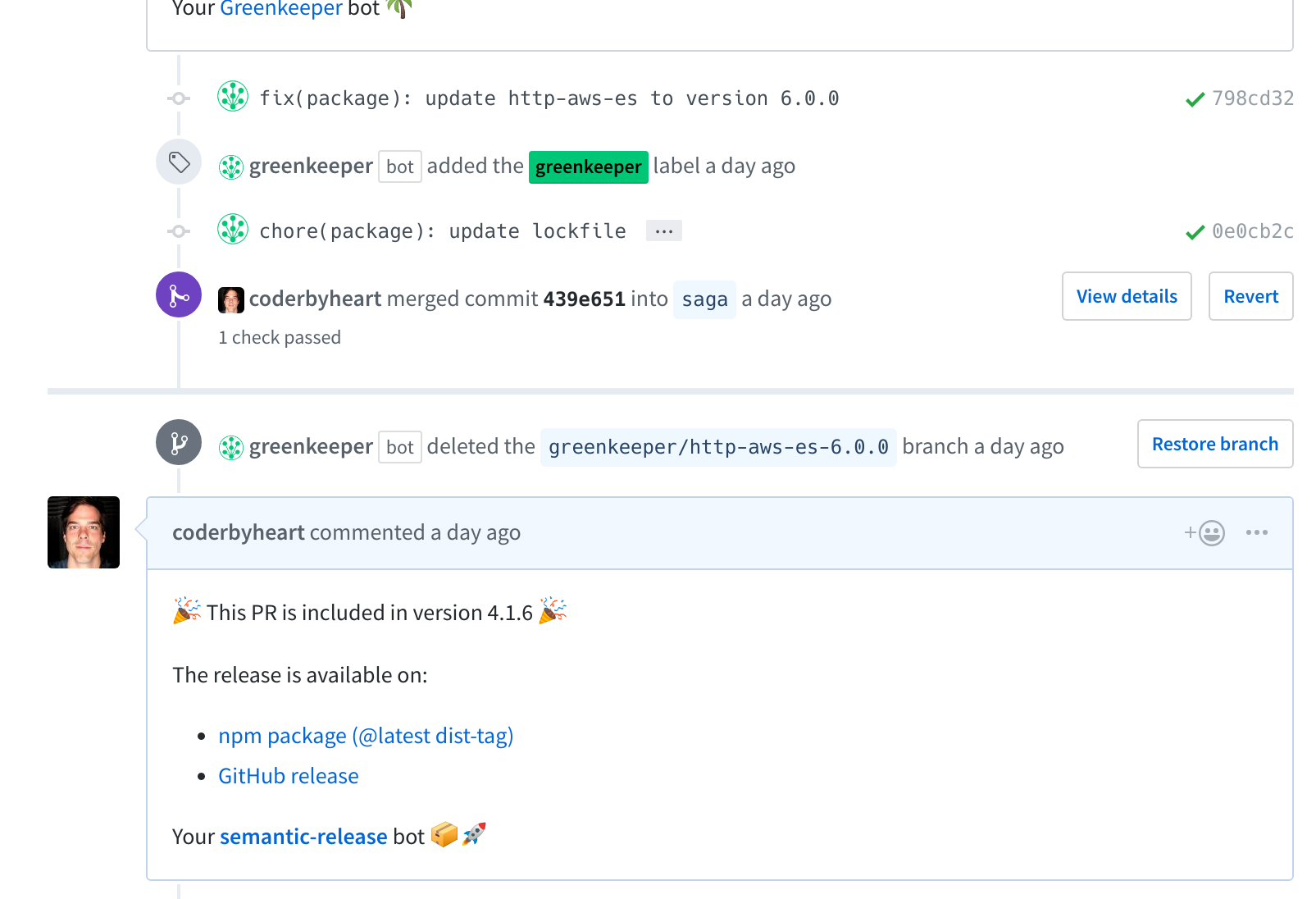 As a Software Crafter I am using my 20+ years of experience working as a software developer,consultant,coach,mentor,and founder to build cloud-based solutions for the Internet of Things using JavaScript atNordic Semiconductor..